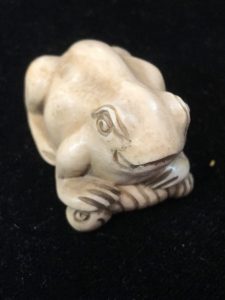 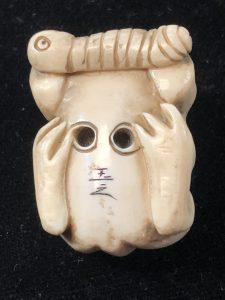 Here are two sides of a sweet Frog Netsuke. This little guy has been sitting on my desk for the last year. These small sculptures were invented in 17th century Japan. They were originally used as a clasp for a pouch used by Japanese men for carrying objects in the days before pockets.

According to Wikipedia: Netsuke, like the inrō and ojime, evolved over time from being strictly utilitarian into objects of great artistic merit and an expression of extraordinary craftsmanship. Such objects have a long history reflecting the important aspects of Japanese folklore and life. Netsuke production was most popular during the Edo Period in Japan, around 1615–1868. Today, the art lives on, and some modern works can command high prices in the UK, Europe, the USA, Japan and elsewhere. Inexpensive yet faithful reproductions are available in museums and souvenir shops.